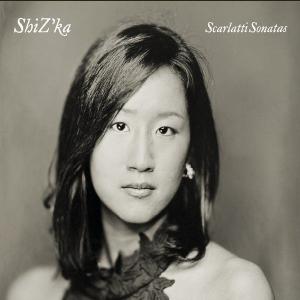 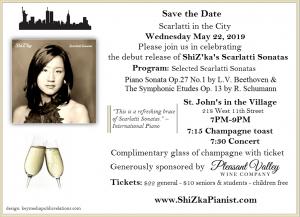 International Piano writes: “A refreshing brace of Scarlatti Sonatas. The order of the sonatas works beautifully; the playing is elevating.”

ShiZ’ka comes from a family of musicians. Her parents Nobue and Toshiyuki Saeki are both classical musicians (bassoonist and oboist, respectively) and run a very successful music school, Poco A Poco, in Japan. Since ShiZ’ka was very young, she possessed a deep passion to perform. Much later, she was profoundly inspired by the nobility of Emil Gilels’ performances.

She supplemented her classical training by studying with famed jazz pianists Makoto Takenaka and Yoko Yamamoto. Her early exposure to jazz has influenced her approach towards classical music, in what some are calling an “individual sensibility to timing and rhythm, with clarity and articulation.”

When asked why Scarlatti, ShiZ’ka explains, “When I started learning the Sonatas, my hands and fingers naturally played each piece as if I had played them all my life. It was a body, mind and soul connection for me. Hearing a recording of Elaine Comparone playing the K118 on the harpsichord impressed me so much that I made it a goal to play the Sonatas on the piano as brilliantly and as gracefully as Ms Comparone did on the piece’s originally intended instrument.”

The fourteen sonatas from Scarlatti’s repertoire have been chosen by ShiZ’ka and were recorded in random order. After the recordings were completed, ShiZ’ka took an intuitive approach to organizing the order for the sonatas so the album would have an organic flow, rendering each sonata relevant to the other, while allowing each sonata to stand on its own.

ShiZ’ka’s next performance will be Wednesday, May 22 from 7-9 PM at St. John’s in the Village, New York City. For more information please visit: https://www.shizkapianist.com/performances

About KeyMedia Public Relations: Located in New York City, KeyMedia Public Relations is a results-driven, boutique PR firm and Production Company owned and operated by Denise Marsa. The company provides a full spectrum of services, ranging from creative and strategic to advisory. The focus is on arts & entertainment, health and wellness and non-profit.