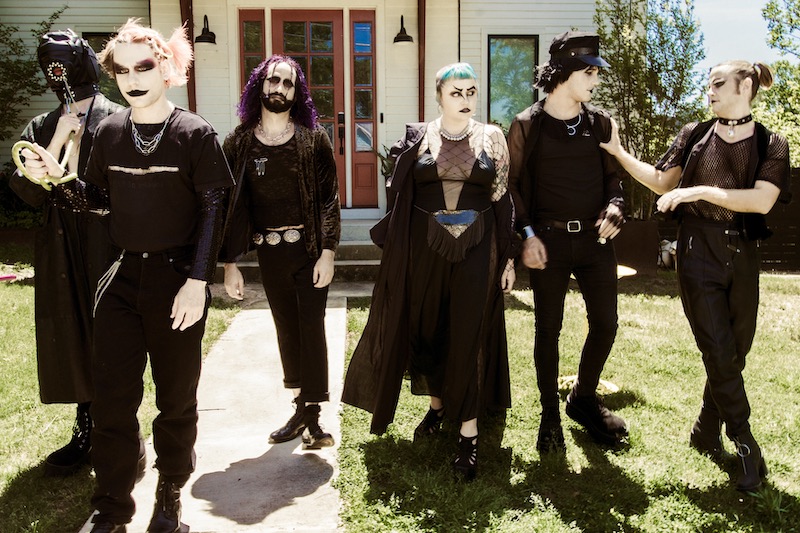 In the new video for “That’s Why We Dance,” Calliope Musicals squads up on the front lawn, goth’d out to the nines: boots, black lipstick, leather, fishnets, and dog leashes in abundance.

Calliope Musicals in “That’s Why We Dance.”

The contrast of a sunny neighborhood landscape with lips singing through a bondage mask serves as effective imagery for the upbeat track’s lyrics, which posit existential questions about belief and creation, while encouraging us to “keep living in the romance.”

“I’ve had this vision of a goth family in front of a perfect picket fence house for a while, and when [producer] Kate [Blaising] and I were brainstorming videos for ‘That’s Why We Dance,’ it occurred to me that a moody, goth family would be the perfect messengers for a decidedly upbeat and bright tune and message.

“Plus, I think putting the generally vivid and multicolored Calliope Musicals in a monochromatic scene is long overdue.”

The lo-fi clip, shot on VHS by Alex Chod of the band Midcentury, captures a couple hilarious moments when normie neighbors happen upon the goth gathering and politely wave. The filming also coincided with Fussell forgoing her trademark locks.

“Delaney Bayou did hair and makeup on all of us and shaved my head in her Lockhart living room,” reveals Fussell. “I tried to sell it at my merch booth, but I think $50 was too much. Honestly, it’s kinda all matted up into a single little hairball by now, so if you want it for free just hit me up and it’s all yours!”

“That’s Why We Dance” showcases Tuesday, Dec. 10, at the Alamo Ritz as part of the Austin Music Video Festival, the same night that music video masters OK Go take part in a Q&A. The Calliope Musicals clip netted a nomination for an “Alright Alright Alright” Award, which highlights material embodying the creative spirit of Austin.

Get a first look at the video right here: