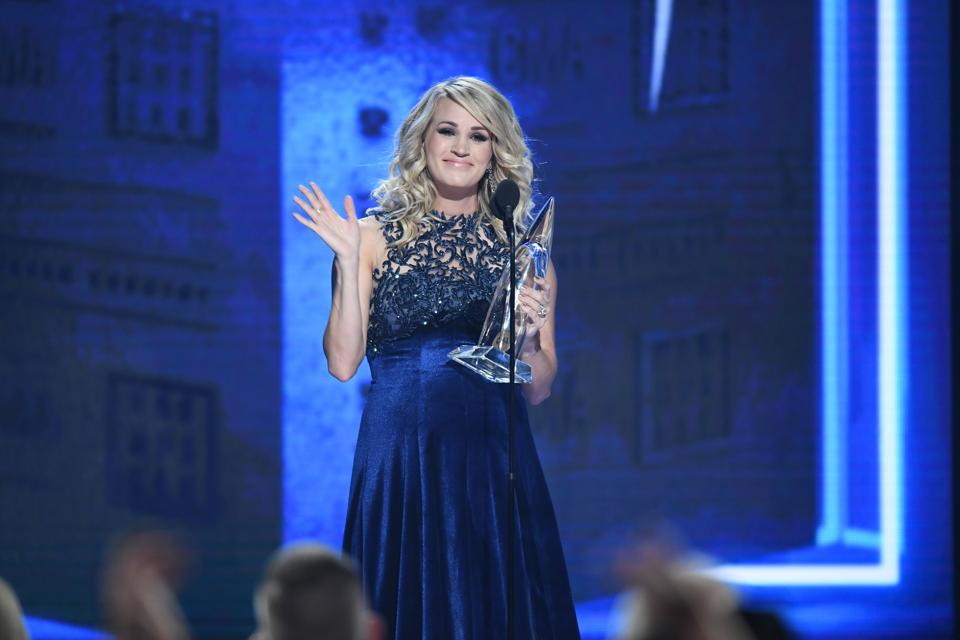 The Country Music Association announced today that its annual awards show will feature an all-female hosting lineup: Carrie Underwood, who previously helmed the show for 11 years alongside Brad Paisley, and “special guest hosts” Reba McEntire and Dolly Parton, both Country Music Hall of Fame members and CMA Entertainer of the Year veterans. They will be “celebrating legendary women in country music throughout the ceremony,” which airs live from Nashville on Wednesday, November 13.

The lineup—while obviously iconic—feels like an overcorrection for CMA, who (like virtually every country music establishment) has faced backlash in recent years for its lack of female inclusivity.

The lack of equal opportunity for female artists in country music is like the broken record that just won’t stop playing. Countless writers have been covering it for years (me included), and despite tons of high-profile stunts like this one by the CMA, nothing seems to change. In fact, things are getting worse: according to a recent study, while women held 33.3% of year-end songs on 2000’s Mediabase charts, representation declined 66%—down only 11.3%—by last year.

While just about everyone admits something in country music’s culture needs to shift, no one can seem to agree on how to make it happen. Perhaps because each entity blames someone else for the problem… or, even worse, outright denies any problem exists.

Radio is often the scapegoat (and recently, to a lesser extent, streaming services), but its power players point fingers back squarely at labels and publishers, saying female writers and artists aren’t being signed, developed, and promoted with the same intensity as their male counterparts. Meanwhile, because radio is still such a dominant force in the industry, less airplay means fewer big-time tour and festival opportunities for female artists.

Last year, at CMT’s also-all-female Artists of the Year show, ’90s country staple Sara Evans told me she actively encourages young female country artists to pursue other genres, where it’s easier to find success. While Maren Morris and Kelsea Ballerini are the two big female breakouts at country radio in the past five years, it’s worth noting that they’ve both pursued (and found big success) at pop radio. And, of course, one of country’s most celebrated young stars, Kacey Musgraves, has proven it doesn’t take country radio’s support to win every major fan and critical accolade, up to and including a Grammy for Album of the Year.

Underwood, for her part, has been one of several artists outspoken about the lack of opportunity. She’s also helped create opportunity, giving platforms to several young artists, including inviting young groups Maddie & Tae and Runaway June on the road with her.

There’s nothing I can write here that hasn’t already been said in the tired debate about females in country music. Frankly, I’m sick of discussing it—so imagine how tired the young artists in the format are of living it every. single. day. Instead, I’ll make a few predictions:

One: When the nominees for the CMA Awards are announced on August 28, Carrie Underwood and Kacey Musgraves will both be named as Entertainer of the Year finalists. One will win in November, and although either is very deserving, online trolls will dismiss her achievement as a politically-motivated make good. (Taylor Swift is the only female artist to win EOTY since 2000, when the Dixie Chicks took home the prize. Swift won twice, in 2009 and 2011.)

Two: The CMA’s female-focused show will generate tons of positive publicity, with the hosts and artists championing the genre’s young talent, talking endlessly about the need to spotlight and elevate those artists. After the glitter is swept up, lots of people will talk. A few will promise action—fewer will take it. Nothing will change.

Three: As a direct result of number two, the genre will continue to suffer irreparable longterm harm. Super-talented female (AND male) songwriters and artists who would’ve otherwise been working in the country format will take their gifts to other genres and outlets. The talent drain will, over time, lead to fewer listeners and consumers, causing a significant economic impact at every level: fewer ad dollars for radio stations, fewer attendees at festivals, and fewer consumers spending money on music and merch.

I hope I’m wrong about the third one, but the industry hasn’t given me much of a reason to believe otherwise. If any women can turn the tide, though, it’s hard to think of a better trio of Country Music Avengers than Carrie, Reba, and Dolly, who have collectively won 22 CMA Awards on 124 nominations and conquered every aspect of both pop culture and commerce. I’ll be watching—and praying—that this latest pitch for equal opportunity will be the rhinestone-studded straw that breaks the camel’s back.