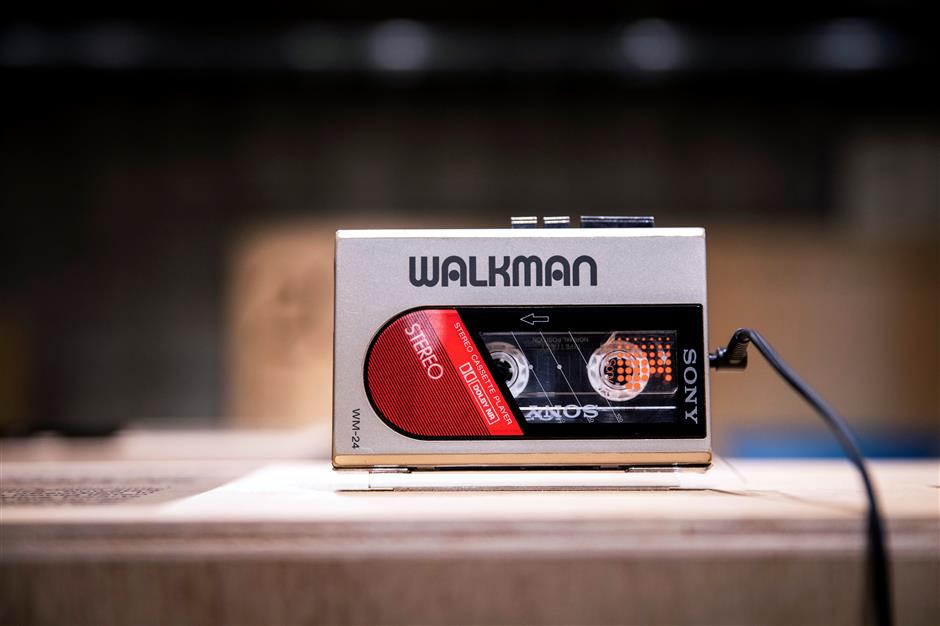 A WM-24 Sony Walkman audio player is displayed at an exhibition marking the 40th anniversary of the iconic device in Tokyo on Saturday.

Must-have 1980s gadget and one-time icon of Japan electronics cool, Sony’s Walkman turned 40 this year and like its now middle-aged fans, is clinging to its youth with high-tech updates.

On July 1, 1979, as the global economy suffered through the second oil shock, Sony unleashed on the world a dark-blue brick of a machine with chunky silver buttons, the Walkman TPS-L2.

Priced at a hefty 33,000 yen — US$300 in today’s money — the first-generation Walkman could not record but its stereo music playback function quickly captured hearts in Japan and then the world.

It had two headset jacks — labelled “guys” and “dolls” — to allow two people to listen simultaneously. A bright orange “hotline” button could be pressed to lower the volume while the couple chatted.

After a disappointing first month when only 3,000 units were sold, sales exploded to eventually hit 1.5 million worldwide for the first model. The second model, the WM-2, which came in red, black and silver, chalked up sales of 2.58 million.

Over the following four decades, Sony sold more than 420 million “Walkmen” and stopped counting the number of models it had produced when it hit the 1,000 mark — about 15 years ago.

The Japanese electronics giant chose the name partly because of the popularity of Superman at the time and the fact it was based on an existing audio recorder called “Pressman.”

The word “Walkman” has since entered everyday language but the device was initially called “Soundabout,” “Stowaway” or “Freestyle” in some parts of the world.

Sony continued production of the cassette-tape Walkman until 2010, long after the technology had been overtaken first by the Compact Disc in the 1980s and the MiniDisc Walkman in 1992.

Like many in the industry, the Japanese firm was shaken by the emergence of Apple’s iPod when suddenly a listener’s entire music collection was available on the move.

But Sony has scrambled to keep up and the latest high-end versions cost well over US$2,000 and look more like a smartphone with flash memory and high-res audio — a far cry from the early generations.

Sony engineer Hiroaki Sato, who worked on the early Walkman editions, even said it would be “quite difficult” to replicate the technology now, as it would involve painstakingly reproducing high-precision components.

He said the current versions would likely not exist in 40 years as the recording formats and rechargeable batteries would undoubtedly have changed beyond recognition.