Use your education to unite Nigerians, Buhari challenges NYSC members

– The singer expressed that she always wanted to be in the limelight, and decided that music was the way to do that

Nigerian rising star Omobusola Kareemat Alaka, popularly known by her stage name Okal, has revealed that she quit football to pursue a career in music. The female musician also talked about why she decided music was the way to go.

In an interview with Legit TV, the singer expressed that she had to quit football because she knew she always wanted to make people happy, and not to compete for the rest of her life.

According to her, at the age of 5, she always knew she wanted to be in the spotlight, but she had no idea how to do so. She stated that she talked to her mother about it, but she refused, saying there are other careers she could pursue. 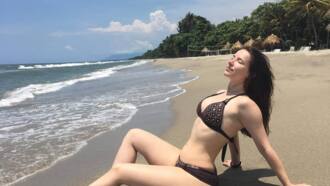 Okal said: “I want to be on TV and my mum asked if I want to study music. Like every Nigerian mother, she immediately forbade it.”

The singer also talked about the first time she recorded a song. She stated that her cousin who sings came home for a visit and they started freestyling together.

She also talked about how she saved up for a guitar and fell in love with playing it. She said she named the guitar Kaz.

Okal revealed that she does not regret quitting football for music. She noted that music is about making people feel better and sports were all about competing.

READ ALSO: NAIJ.com upgrades to Legit.ng: a letter from our Editor-in-Chief Bayo Olupohunda

What does Tiwa Savage’s new record deal mean for her and Mavin Records?

Meanwhile, Legit.ng had earlier reported that fast-rising star Zlatan Ibile recently trended on Twitter Nigeria after he failed to keep a promise he made to fans. The rapper had promised to do a cash giveaway, sharing one million naira between four of his fans, but he failed to do so at the time he promised.

NAIJ.com (naija.ng) -> Legit.ng We have upgraded to serve you better

Olamide treats everyone with respect – Fireboy DML – on Legit TV