In the 22 years since making her Broadway debut in “Steel Pier,” Kristin Chenoweth has emerged as a stage presence without parallel. Her stints in hit musicals like “Wicked” and the 2015 revival of “On the Twentieth Century” have garnered her a diverse audience that extends far beyond the Manhattan theater scene.

But when Chenoweth hit the stage of New York’s Lunt-Fontanne Theatre in November 2016 for her acclaimed solo concert, “My Love Letter to Broadway,” she met an unusual challenge ― that is, she had to unite viewers from both sides of the political spectrum following a contentious U.S. presidential election.

“Half my audience was devastated and half of them were thrilled, which says a lot about where we are in our country,” Chenoweth told HuffPost. Faced with that division, she began to approach the gig in a neo-vaudevillian fashion by vowing to deliver “a night of fun for all viewers,” regardless of their civic allegiance.

Kristin Chenoweth (left) enlisted Ariana Grande for a new take on Lesley Gore’s 1964 classic, “You Don’t Own Me.”

“I said, ‘We have a new president today. Some of us didn’t vote that way, [but] let us still enter this time with hope,’” said Chenoweth, a Tony Award winner for her performance as Sally in the 1999 revival of “You’re a Good Man, Charlie Brown.” The no-nonsense gesture turned out to be successful. “About halfway through, I could see people letting go of the heaviness many of them brought into the theater,” she said.

Nearly three years later, that experience continues to inform Chenoweth’s work, including her new album, “For The Girls.” The 12-song collection includes tunes written or made famous by Judy Garland, Dolly Parton and Carole King, among other artists, and it doesn’t address politics in any overt way. Still, Chenoweth has come to see the album, which drops Friday, as her response to the current political climate, in that it puts the words and voices of strong, empowered women front and center.

“I didn’t set out to make a female empowerment record. It just happened,” she said. “It was all music I’d grown up with, [but] with what’s going on in our world right now … it evolved into that. I just wanted to celebrate women, especially those who came before me, and tip my hat to them, say thank you.”

Chenoweth (right) also teamed up with Dolly Parton for a duet version of “I Will Always Love You.”

True to form, Chenoweth infuses fresh, if pleasantly retro, energy into songs like Garland’s “The Man That Got Away” and Barbra Streisand’s “The Way We Were.” But “For The Girls” also afforded her the chance to team up with a number of powerhouse performers from varying genres.

She teamed up with Parton for “I Will Always Love You,” reimagined here as a diva duet. Ariana Grande makes a guest appearance for a new take on Lesley Gore’s 1964 classic, “You Don’t Own Me,” as do Jennifer Hudson and Reba McEntire on “I’m A Woman,” first recorded in 1962. (Catch “You Don’t Own Me” in the video above.)

“As the album evolved, I felt like I needed some songstresses, and I needed some of my favorites,” Chenoweth said. Given that her vocal style have long been compared to Parton’s, reaching out to the country legend was particularly emotional.

“I didn’t think she’d say yes, but she did,” Chenoweth said. “When I found out, I cried. I always thought, ‘One day, I want to sing that song.’ Little did I know that I’d be singing it with the queen herself, the woman who wrote it.”

On the flip side, Chenoweth’s relationship with Grande is a maternal one.

“I’ve watched her grow up,” she said of the Grammy winner, with whom she co-starred in 2016’s “Hairspray Live!” on NBC. “I know what kind of singer she is. More importantly, I know what kind of a person she is. I haven’t had to deal with the level of fame that she’s had, but I know she’s an old soul, and I can relate to that.” 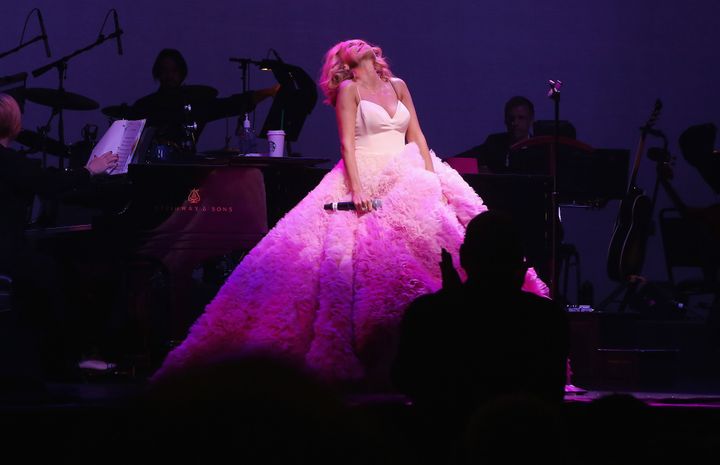 “For The Girls” marks the start of a busy fall for Chenoweth. In November, she will reunite with longtime director Richard Jay-Alexander for eight concerts at New York’s Nederlander Theatre in support of the album. She returns to the small screen opposite Scott Wolf in Hallmark’s “A Christmas Love Story,” a project she describes as “very close to my heart” in terms of its subject matter. Though mum on specifics, she added, “When people see it, they’ll know.”

No doubt a return to Broadway is in Chenoweth’s future, as the singer-actor is hotly linked to a forthcoming bio-musical of televangelist Tammy Faye Bakker as well as a stage adaptation of the 1992 comedy “Death Becomes Her.”

As far as “For The Girls” is concerned, Chenoweth is hopeful that her fans will see the album as her testament to empowered, era-defining women who pushed the boundaries of music and self-expression through raw talent and ambition.

“I’m still an old school artist who looks at an album from A to Z, telling a story,” Chenoweth said. “I want [audiences] to see that I love the women that came before me, and I also want singers like Dolly, Reba, Jennifer and Ariana to know the respect and love I have for them, too.”

“This one’s for the girls,” she added.