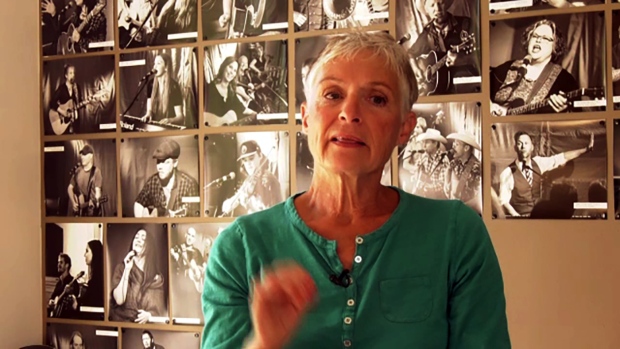 Over the next month and a half five Calgary musicians will each compose an original song in just seven days. They will all do it using the same acoustic guitar, which gets passed from artist to artist.

The project started in 2012 when New York resident David Adams passed his guitar around to some musician friends with a challenge attached: compose an original tune in a week.

It’s since grown to span the globe with various cities in Europe, Asia, and the Americas all participating.

That includes six Canadian cities, which have musicians composing for this year’s Acoustic Guitar Project.  Each city has a project curator who chooses the musicians, and plans a concert finale.

Jackie Bourgaize curates the Calgary edition of the project, which started September 2.

“I think if people really appreciate where a song comes from, where the germ of the idea comes from they would appreciate coming to the acoustic guitar project,” she said.

Bourgaize, already hosts monthly concerts in her northwest home, dubbed the Gallery House Concerts Society.  She  will present the five musicians for the final concert of the project in her living room. It can accommodate 40 to 60 guests, as well as the musicians.

She says music fans are already stoked to hear what a single guitar and five imaginations can come up with.

“ I have people going when is the Acoustic Guitar Project?” Bourgaize said.

This year,  the first musician to receive the folding Fender guitar, which is covered with the signatures of every artist who has composed on it, is Joni Delaurier, one of the co-writers of the CCMA-nominated 2007 country hit Pickup Truck, among many others.

“For me it’s a new song (to write),” she said.  “What’s more exciting is the energy that’s in this guitar, knowing that so many people have picked it up and come up with completely different things is really cool.”

In a break from composing in her northwest home, Delaurier reflects on the magnitude of the project she’s now a part of.

“If there are hundreds of people doing what I am doing worldwide, how many songs are there that never would have come into the world minus this project, on these guitars?” she asked.

Once Delaurier finishes at the end of the week she add her signature to the guitar and hand it off to musician Nick Titus. This year’s musical quintet is rounded up by Matt Blair’s, Kendall Rodney Bilan, and Gerry Madigan.

The wrap up concert, will be held on October 27th at 3pm at Gallery House Concerts Society. (119 Nottingham Rd NW, Calgary)