After securing a spot in the stroller parking lot, families filed into the Long Beach Performing Arts Center on Saturday afternoon. Most parents wore shirts that matched the tees of their toddlers, who held tightly to aquatic stuffed animals they insisted on bringing from home. They nearly filled the three-tiered Terrace Theater to see their favorite entertainer, live: Baby Shark.

I must admit: I’m the rare subset of the human species who had never heard the infectious kids’ song in its entirety. With myself and most of my millennial friends putting off procreating for a few more years, I was only exposed to that signature riff through colleagues’ social media posts, showcasing their children singing and dancing in their living rooms. (Of course, the viral earworm would still stick in my head for days.)

So when the South Korean children’s educational brand Pinkfong and event production company Round Room Live announced the inaugural U.S. tour of “Baby Shark Live!,” I was curious: how can a 90-second track be effectively stretched into an 80-minute live show? Would the dance demonstration — which has over 3.5-billion views, making it the sixth-most-viewed video in the history of YouTube — simply be played 50 times, like some compilations do?

Some of the ticket prices of the Long Beach show reach triple-digits, even though you can spend the entire day at the nearby Aquarium of the Pacific and see real sharks for less. What could a live version of these popular videos offer that would beat the convenience of playing the same songs at home, for free, on-demand?

“‘Baby Shark’ plays at least once a day in our house,” said Mia Morales of Pasadena, attending Saturday’s matinee with her mother, Tina, and her 1-year-old son, Louis Touré. “He used to beg for it, but now he realized it’s a routine — it’s like he’s trained me!”

“At first, it’s like, ‘Ugh,’ but at the same time, not gonna lie, it’s kind of catchy,” echoed Tristan Dingson of San Diego, who drove with his wife, Gina, and 17-month-old son Tyson, custom-made tees in tow. “You get used to it, like it’s not so bad. And then you started liking it.”

That’s exactly how I felt watching “Baby Shark Live!,” a show that brings these popular Pinkfong videos to life in a way that’s part educational programming, part musical theater and, yes, part rock concert. Ten performers sing and dance through 20 well-known tracks in front of a vivid, stage-spanning LED wall, while handling cartoon-like puppets and physical set pieces. Colorful, arena-like lighting dances atop the audience from trusses on each side. 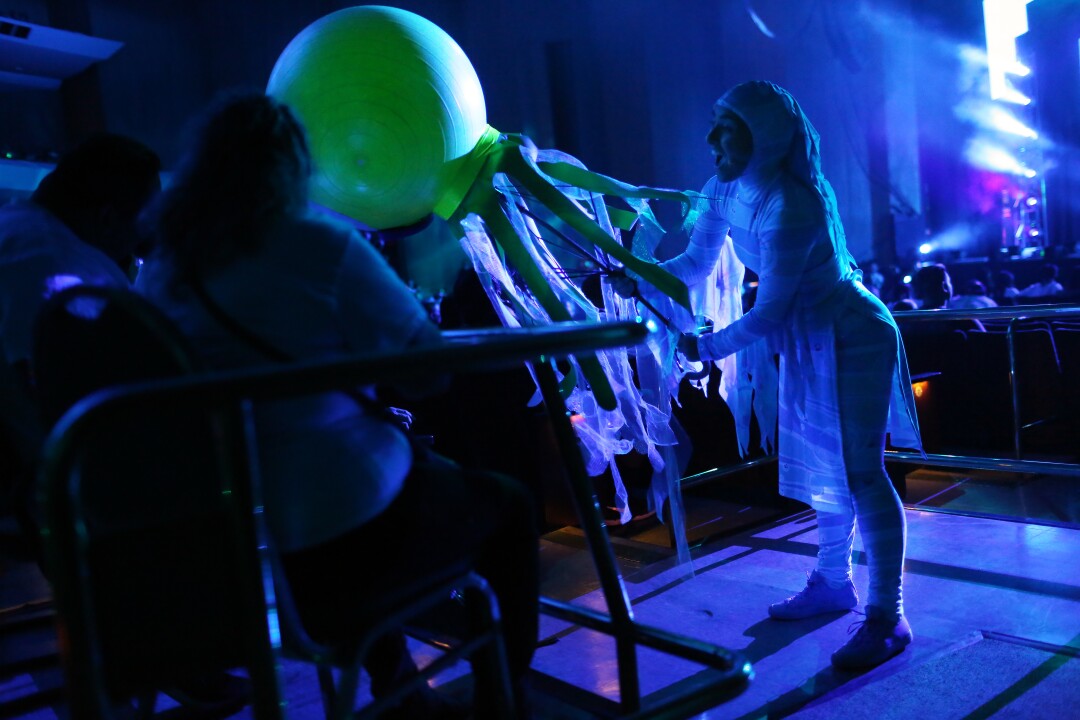 “Baby Shark Live!” opens with performers and puppets interacting with the audience as the lights dim.

“There’s a lot to keep a child’s interest going,” said Jamie Selke, who wrote, directed and choreographed the show. “Parents have an expectation, but at the same time, they don’t know what to expect, so we try to give them more than they bargained for.

The production’s uncomplicated narrative sees the friendly yellow “Baby Shark” character Ollie try to meet with friends: the magical fox Pinkfong and the intelligent hedgehog Hogi. (Of the shark family, only Ollie is touring; the rest of the family appears on the onstage screen.)

Aside from being visually stimulating, the show captures exactly what has catapulted Pinkfong toward the top of the children’s music market: educational messages delivered by adorable characters through incredibly catchy tunes. 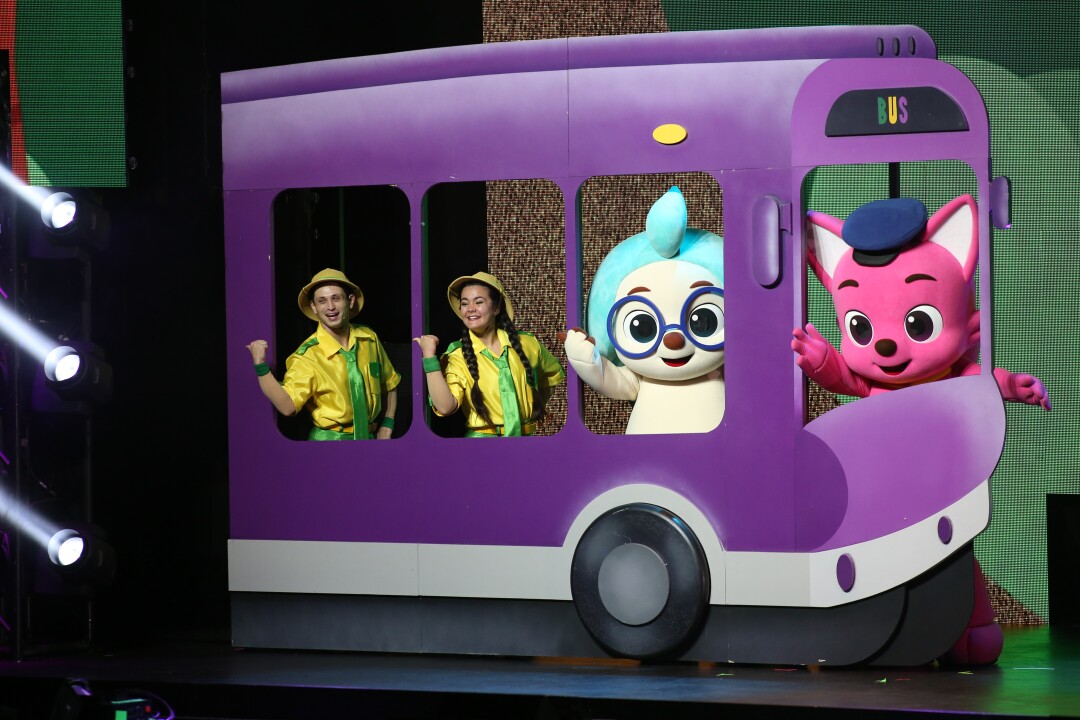 The show features the magical fox Pinkfong (right) and the intelligent hedgehog Hogi (center) meeting two rangers and learning about the rainforest.

The upbeat set list had kids bouncing in their seats while singing about the importance of friendship, family and eating your fruits and vegetables (and their parents then joyfully recorded their ecstatic reactions on their phones). “Five Little Monkeys,” “The Wheels on the Bus” and “Skidamarink” received notably loudly applause, and “The Penguin Dance” got half the audience to their feet to perform the moves with the characters onstage.

“Our goal is to make something that’s entertaining for kids, so to see such a big crowd singing and dancing along was very touching,” said Heesun Byeon, Pinkfong content director, after the show.

Added Marina Lee, director of Pinkfong global consumer products, “This is a new market we can really develop in the future. Until now, they all experience it in the privacy of their own homes, but when they come to this show and see other kids so excited, it takes the brand to a new level.”

Between songs, the onstage dialogue was occasionally drowned out by the kids’ chatter and crying — sounds long ago normalized for the parents in attendance. Some toddlers’ older siblings attended the show begrudgingly, and scrolled on their phones to try to pass the time. At intermission, the sought-after merchandise booth reopened to large crowds — as did the venue’s bar.

“How long is the show? I thought it was over at intermission and I was so happy,” said one dad just before pounding a “much-needed” beer (and declining an interview with The Times). 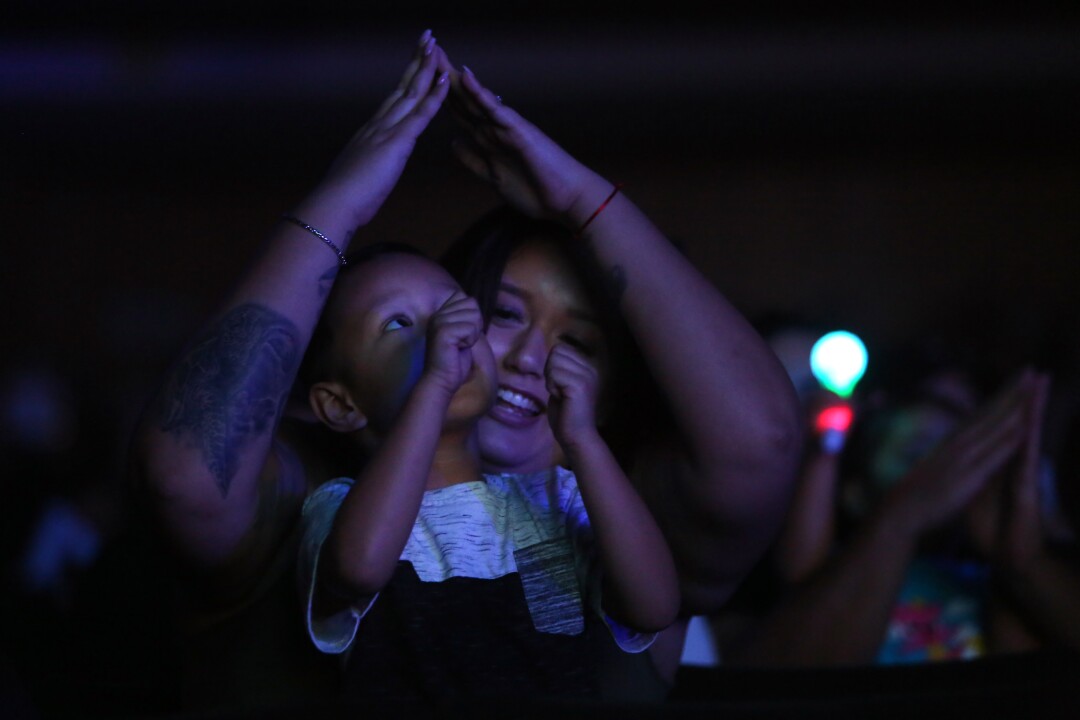 Three-year-old Julian Prum sings along with his mom Jessica Maggart at the interactive show.

The titular track wasn’t played until the end of the first act, but throughout the show, a small yellow shark sporadically appeared onscreen and sang a single “doo doo doo doo” riff — a blink-and-you’ll-miss-it moment that got kids so excited every time.

And when the song played again at the end — with a beefed-up instrumentation, an exponentially quickened arrangement and the flickering visuals of a nightclub — the audience was completely rapturous, as streamers and inflatables were tossed among them.

“I love how they teased the song throughout the whole show — are they gonna do it? Is it time?” said Hashim Lafond, who attended with his wife Johnetta and their four kids, Anaiah, Zariah, Yasir and Zaire. “My kids are all different ages, from 5 years old to less than a year, and they were all ecstatic.” “I got to hug Baby Shark!” said Anaiah Lafond (left), pictured with her sister Zariah Lafond, after Saturday’s performance.

Polling numerous parents afterward, the common response was, “It was a lot better than I thought it would be, especially the end.” The young ones exited the venue ecstatic — especially as, for many, it was their first-ever live entertainment experience.

“She was all smiles — I think she couldn’t believe it because she’s normally watching this on the iPad,” said Morgan Hardman of her 9-month-old daughter, Ariah Nickson. “I thought, ‘Wow, we gotta do this more often.’”

Though the 2 p.m. matinee was a crowd-pleaser, with a 6 p.m. show that followed, Hardman did offer some constructive criticism about the show: “They gotta ask some moms — we need a 10 a.m. performance next time.”