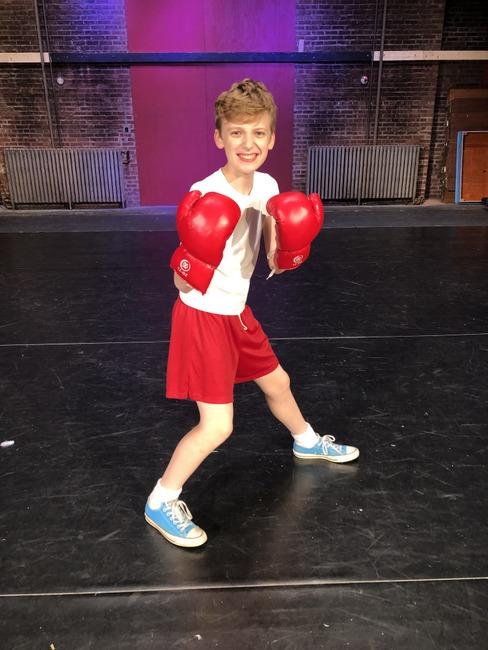 Dance, Billy, dance! And that he did during the Spotlight Theatre’s current production Billy Elliot: The Musical. Friday’s opening-night performance was magical and certainly razzle-dazzled me. Directed by one of my favorite local actors, Adam Sanders, there was never a dull moment; the evening was full of spinning chair stunts, great chassés, pirouettes, tap dancing, and lots of outstanding singing.

Sanders, along with his assistant director Megan Warren, knocked it out of the park. Boasting music by the legendary Elton John and a book and lyrics by Lee Hall, this story takes place in northeast England, and tells of a young boy from a coal-mining village who overcomes his circumstances to become a ballet star. The musical is set against the background of the 1984-85 miners’ strike that devastated the whole community, and in the midst of this strike, Billy Elliot (Brennan Hampton) discovers his passion for dance as a therapeutic way to get in touch with his emotions and individuality. His family and friends, although a bit critical at first, learn to embrace him.

The show’s beginning included clever use of the curtain doubling as a projection screen in which images flashed and gave the audience a little history about what we were about to see. There was also a fantastic silhouette effect, with great lighting design by Brent Tubbs, that provided a lovely visual of dancers behind a white-sheet backdrop. Under the terrific music direction of John Whitson, and starting off things strong, was Taylor Bley as Billy’s older brother Tony. Bley’s voice is incredible with rich, full tones as he leads the company in the opening number, “The Stars Look Down.”

Mike Turczynski’s set design was phenomenal as cast members wheeled it about effortlessly and in efficient manner, with Billy’s bedroom nestled high atop a staircase nuzzled on a platform. There was a charming kitchen and dining-room set, and everything looked polished. Costume designer Alexis Lotspeich and her assistant Julie Hummel did a wonderful job with the ballerinas decked out in their tutus and brightly colored knee-high stockings, accenting the ensembles with fluffy white feathers. And even though there were some frustrating audio issues on Friday, the overall performance was both inspiring and entertaining.

It was obvious that Hampton put in a lot of hours learning ballet and he brilliantly executed Bethany Piotter’s choreography. Hillary Erb was equally dazzling in her role as Billy’s hardcore, rough-around-the-edges dance coach Mrs. Wilkinson. Christopher Tracy, meanwhile, was extraordinary as Billy’s Dad, and really tapped into a multitude of emotions from anger to frustration to sadness.

Luke Woodruff is clearly a rising star, and his overwhelming talent just stunned me as he portrayed the flamboyant Michael Caffery, a young man who delighted in wearing dresses and tutus. You couldn’t help but love his character and Woodruff clearly is cut out to be an actor; his comically melodramatic performance on Friday left the audience in stitches.

One of my favorite bits of the evening was “Born to Boogie,” in which Mrs. Wilkinson, Billy, and Mr. Braithwaite (Brent Tubbs) all busted a move on the dance floor. Tubbs was especially hilarious as he stripped down to his blue boxer shorts and proceeded to breakdance, which was quite impressive. 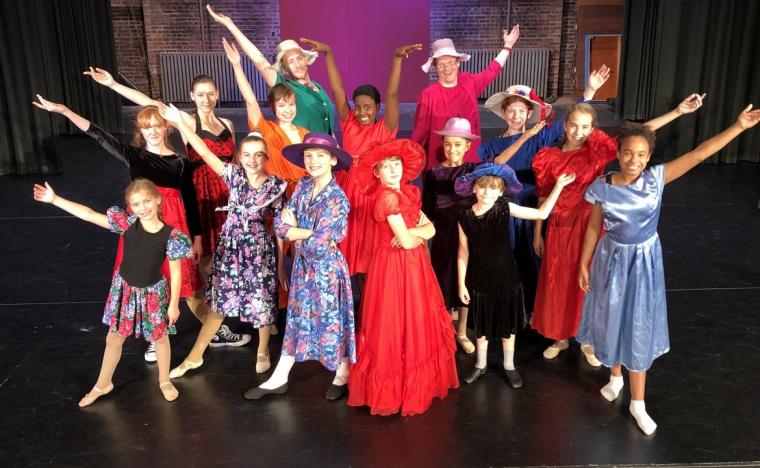 Billy Elliot’s Act II opened with “Merry Christmas, Maggie Thatcher,” with the kids wearing fun, creative Maggie Thatcher masks. And as for the explicit language that was noted in a disclaimer, I hardly noticed it. As the Spotlight’s Web site states, “The swearing in Billy Elliot reflects a very specific culture and moment in time. It is firmly in a British tradition which allows more robust language into its drama.” (Nancy Teerlinck was also a little edgy with her “Grandma’s Song,” a number that I found refreshingly pure and funny as Grandma demonstrated her love for life and regrets in not living it to the fullest.)

Also worth noting for their wonderful sound effects are Zach Champlin and Sam Schelly, who incorporated authentic-sounding sirens, an unruly crowd, and blustery wind into the production. I found the entire evening quite fun and really appreciated how much work producers Brent and Sara Tubbs poured into this musical. It was also nice to see how the cast members used the entire auditorium to make the show more interesting by entering and exiting through the center aisle, as well as mingling through the audience.

As for the show’s ballet girls – Wrigley Mancha, Kailee McCaw, Elena Kook, Ellerie Hurley, Laney Chandler, Anna Harris, Dorothy Turner, Evyn Hassel, and Destiny Stevens – they were super-duper cute and gifted not only as dancers, but actresses. The entire ensemble brought their A-game on opening night, and I suspect the show only got better from there.

The message of solidarity and individuality rang clear on Friday night with the Spotlight Theatre’s Billy Elliot: The Musical, which offered hope, inspiration, and freedom of expression. Cheers to a job well done!

Billy Elliot: The Musical runs at the Spotlight Theatre (2800 Seventh Avenue, Moline) through October 27, and more information and tickets are available by calling (309)912-7647 or visiting TheSpotlightTheatreQC.com.