Kaiit was awarded new talent of the year, Briggs took out film clip of the year for Life Is Incredible, and community clip of the year went to 15 Deniliquin High School students – known as the Deni Mob – for their  song State Of The Heart.

Named after the Koori word for sisters, Tiddas was made up of Lou Bennett, Sally Dastey and Amy Saunders. Their harmonies were extraordinary, rather like those achieved by siblings. Playing together in the 1990s, theirs is part protest music, part celebration of life. The group broke up in 2000, calling their final album Show Us Your Tiddas, reclaiming what was a taunt thrown at them when they performed.

Briggs rewrote the lyrics for the Australian national anthem this year; Tiddas sang about its absurdity back in 1996, with their song Anthem. “We are the lucky country / Where anyone can win / If you were born to the right family / With the right coloured skin”. 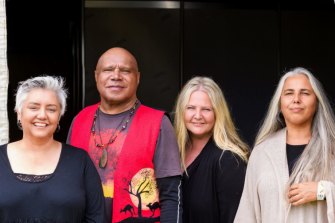 Roach launched the Archie Roach Foundation’s Award recognising a NT artist in the early stages of their career, providing $2000 as well as mentoring from industry professionals, thanks to a donation from board member and inaugural ambassador Jack Charles.

The first ever recipient of the Archie Roach Foundation Award was new talent of the year finalist Mambali.

This year has been a massive year for Indigenous music but as Tiddas’ Amy Saunders said back in 1999, Aboriginal music has been around for years: “The rest of Australia is only now just clearing out its ears to listen.”

Artist of the year

Album of the year

Song of the year

New talent of the year

Film clip of the year

Community Clip Of The Year

Deni Mob – State Of The Heart