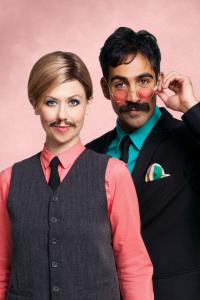 Lindsey Angell and Nadeem Phillip in Bard on the Beach’s As You Like It, photo David and Emily Cooper

This season has been an unprecedented hit. We’re breaking all our attendance records, and all four of our plays have resonated with critics and patrons. But As You Like It is a unique phenomenon. ”

VANCOUVER, BC, CANADA, July 31, 2018 — Bard on the Beach announced today that as a result of record-breaking demand for its ‘60s-inspired romantic comedy As You Like It, the Festival’s 29th season will be extended by a week to allow for added performances. The closing night for the Beatles-song-filled musical will now be on Friday, September 28, with four added performances in the extension week.

Says Artistic Director Christopher Gaze, “This season has been an unprecedented hit. We’re breaking all our attendance records, and all four of our plays have resonated with critics and patrons. But As You Like It is a unique phenomenon. Its audiences are cheering with enthusiasm and excitement and it’s become a huge favourite with people of all ages, and from dedicated Shakespeare fans to those who don’t know Shakespeare at all! Performances are close to sold out through to September, and we want as many people as possible to experience the delights of this remarkable production. And we know a number of our patrons are seeing the show more than once! So we’ve made the decision to add shows, and extend our season by an extra week in Vanier Park – a first for the Festival.”

Additional performances of As You Like It are scheduled for Tuesday, Wednesday, Thursday and Friday evenings, Sept 25-28, at 7:30pm.

Visit bardonthebeach.org for full details on all the productions and upcoming special events (Bard-B-Q & Fireworks and Opera & Arias: Bold and Beautiful), the revised schedule and to buy tickets, or call the Bard Box Office at (604) 739-0559.

About Bard on the Beach Shakespeare Festival
Bard on the Beach is one of Canada’s largest not-for-profit, professional Shakespeare festivals. Established in 1990, the annual summer festival’s mission is to perform, explore and celebrate the genius of William Shakespeare, surrounded by the natural beauty of Vancouver, British Columbia. The 2018 Festival will run in Vanier Park from June 6 to (extended date) September 28. Bard also offers year-round education and training programs for youth, adults and theatre professionals in its administrative home at the BMO Theatre Centre in Vancouver’s Olympic Village as well as in schools and community facilities throughout BC’s Lower Mainland.

Bard on the Beach trailer for As You Like It