Music is, for most people, a learning curve. The more you write and play, the better you get. Which makes Tegan and Sara’s decision to re-record songs they wrote in high school for their new album Hey, I’m Just Like You rather remarkable. Most people would have shunted this stuff out of sight, never to be mentioned again. It’s unfair, of course, to judge an artist on their juvenilia, the music they made before they settled on their eventual course. But it can be enlightening, too – to see both their immaturity and their precocity, and try to locate threads they would later expand on.

It’s strange to think of a man who has been a central figure in hip-hop for decades as part of the pack, rather than ahead of it. But long before his solo stardom, before he launched the careers of Eminem and Snoop, before he became the hottest producer in the world, he was wearing shiny suits at the back of the stage, manning the turntables – and sometimes rapping – with World Class Wreckin’ Cru, an electro outfit who were local stars in Compton. Dre even had a theme song, Surgery (“Calling Dr Dre to surgery”), in which he rapped, clunkily: “I’m Dr Dre, gorgeous hunk of a man / Doing tricks on the mix that no others can / The nurses say I’m cute, they say I’m fine / But you better beware ’cause I’ll blow your mind.” Except there’s nothing mind-blowing about the Cru’s two albums, World Class (1985) and Rapped in Romance (86). They’re generic electro, already out of date compared with the music coming from the east coast – Run DMC, LL Cool J, Mantronix, Schoolly D. Dre wouldn’t sound outdated for long.

Few artists have offered quite as much juvenilia to the world as Bowie. There was the R&B phase, with the King Bees and the Manish Boys, then his trying-to-be-the-Who phase, with the Lower Third, all of whom made recordings (all perfectly reasonable, and perfectly unremarkable), before he became your actual David Bowie. But not the actual David Bowie the world came to adore. There was freakbeat Bowie (Do Anything You Say), seaside special Bowie (I Dig Everything), before the first Bowie iteration that stuck: whimsical, Anthony Newley-esque David Bowie, who recorded the single The Laughing Gnome, then a self-titled album for Deram. And despite its status as the embarrassing, stunted relative of the Bowie catalogue, it’s actually a pretty good album. It’s very much of its time, but even if it didn’t have Bowie’s name on the cover, there’d be collectors seeking it out as a prime piece of English psych whimsy. Just pretend it’s by someone called Mrs Marmalade’s Tea Party and it sounds wholly charming. And treasure the Kenneth Williams impression on We Are Hungry Men.

The Beastie Boys tend to look back in shame on their first hip-hop album, Licensed to Ill, but it wasn’t some sidestep into wilful stupidity. Before becoming a wilfully stupid hip-hop group, they’d been a wilfully stupid teenage hardcore punk band: in his compendious survey American Hardcore, even Steven Blush – who can compliment almost any hardcore band, no matter how rudimentary – calls them “puerile”. Nor were they popular on the scene: Sean Taggart, who designed covers and flyers for hardcore bands, called them “effete little shits – a very snotty, elitist bunch”. You can hear their manifest musical inadequacies on the early-years compilation Some Old Bullshit – which also contains their first, pre-Def Jam attempts at hip-hop, and the pastiche reggae (complete with “Jamaican” accents) of Beastie Revolution. There is not one second of this album to suggest they would become one of pop’s best-loved and most-admired groups.

It’s hard to know which piece of Björk juvenilia to avoid first. In 1977, she became one of the rare future art superstars to make a record while still, unarguably, a child – I Love to Love was recorded when she was 11, released when she was 12. And if tinny pop, designed to be listened to at the worst disco in the world – held in a church hall haunted by the smell of vomited-up Fanta and dust undisturbed for decades – is your bag, then be my guest. There was still a long way to go before adult Björk arrived. Her warped but melodic new-wave band Tappi Tíkarrass (who released an EP in 1982, and an album in 1983) were often good – and her voice is already amazing – but you’ve got to get through KUKL before you get to the Sugarcubes. It’s still music for church halls, but now the smell is patchouli, unwashed fabric and spilt cider, because the kid who threw up the Fanta is now a living in a squat and putting on anti-vivisection benefits.

Sixteen-year-old Katheryn Hudson was possessed of a belting voice and a faith instilled in her by her deeply religious parents (her mother wouldn’t let her eat Lucky Charms because Lucky sounded too much like “Lucifer”). She’d been singing in church since she was nine, so it seemed only natural for her to make a Christian record. Her album Katy Hudson sometimes gets called gospel, but it’s not. It’s blandly efficient MOR – “Christian Contemporary Music” – differentiated from drivetime radio staples only by the fact that the subject of her passion isn’t a man, but Him Upstairs. You can hear that Perry has something; you can also hear that she was never likely to be constrained by the CCM format, since she always seems to want to be doing more than the songs will allow. A few missteps later, though, and she was kissing a girl, which she apparently liked. Goodness knows what God thought.

“I feel like the ’unchback of Notre Dame / I’m an ugly sod but it’s not my fault.” The Hunchback of Notre Dame was one of the five tracks in the first session the Frantic Elevators recorded for John Peel, broadcast on 3 March 1981. The gruff voice barking out those lyrics belonged to Mick Hucknall, not yet 21, but already a veteran of Manchester’s punk and post-punk scene (the Elevators formed, as did every other group in Manchester after Herman’s Hermits, fresh from seeing the Sex Pistols at the Lesser Free Trade Hall in June 1976). There’s little in their handful of singles, their pair of Peel sessions or the few pieces of extant film to suggest that anything other than fondly remembered obscurity awaited – until their final single, written in 1978 but not recorded and released until 1982. In Holding Back the Years, suddenly, the fact that there was an extraordinary melodicist and fabulous singer in the band became glaringly apparent.

The “Michael Jackson” in Boston’s pre-adolescent answer to the Jackson 5, New Edition, Brown formed the group himself when he was nine, in 1978. They signed to Arthur Baker’s Streetwise Records in 1982, and promptly had a massive hit on both sides of the Atlantic with Candy Girl. Even 37 years later, that single – on which Brown sang co-lead – is a delightful piece of bubblegum R&B (albeit one so indebted to the Jacksons that it might have been called DEF). Brown was a troubled kid, though, and got thrown out of the group in 1985 owing to his behaviour. He would never again sound innocent the way he did on his three albums with New Edition. 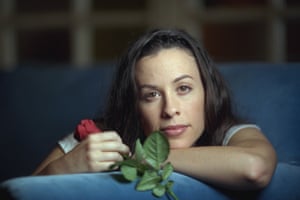 Jagged Little Pill in 1995 wasn’t Alanis Morissette’s emergence, fully formed, into the world. It was, as much as anything, a reaction to the experience of being a teen star, albeit only in Canada. She had made two hit albums – Alanis and Now Is the Time – and won several Juno awards. While she co-wrote across both of them, the sense remained of someone being moulded to fit a record label’s idea of what a teenage singer should be: “My name is Alanis, I’m just 16 / So gimme a break / I’m no disco queen,” she sang on Oh Yeah, from her debut. The first record was dance-pop, the second a little more grown-up (and less successful), and you can hear a voice that is a thousand times better than, say, that of Tiffany or Debbie Gibson; on The Time of Your Life, from Now Is the Time, you can hear the phrasing and delivery of Jagged Little Pill falling into place. But there was darkness to it all. Morrissette later said she was put under such pressure to lose weight that she developed anorexia, and took years to overcome her eating disorders. That confusion would tumble out on Jagged Little Pill.

Like Bowie, Bolan spent much of the 1960s trying to work out how to become himself. And, like Bowie, he left behind plenty of recorded evidence of his voyage of self-discovery: The Wizard and the Third Degree are zippy enough; Hippy Gumbo prefigures Tyrannosaurus Rex. But things got interesting when Bolan joined the mod-psych band John’s Children in 1967. His two best-known songs for them – much celebrated and oft-compiled – are genuinely brilliant. Midsummer Night’s Scene is both haunted and hammering, the sound of purple hearts and blotter acid at the same time (the style that later got named “freakbeat”); Desdemona was banned by the BBC for the lyric “lift up your skirt and fly”. As Rob Chapman wrote in Psychedelia and Other Colours: “Bolan is only let loose at the very end, screaming the chorus line like he has no previous acquaintance with the lyrics or indeed the key he’s supposed to be singing in. He sounds unhinged.”

Two for the price of one, because the most contrary man in the history of rock music and the future Super Freak shared stages together in the mid-60s as part of the Mynah Birds, the best Toronto R&B/soul band to be signed to Motown, albeit in a field of one. It wasn’t really Young’s metier – he was already singing folk when roped in to play guitar – and the band fell apart in 1966 when James was sentenced to five months’ hard labour for going Awol from the US navy (his issues with the navy are a long and fascinating story). Though nothing was released at the time (it emerged later on compilations), the Mynah Birds did get round to recording for Motown before their career was derailed, and the music is worth hearing, for its berserk variety: I’ll Wait Forever is pure folk-rock; I Got You (In My Soul) is stomping garage R&B; It’s My Time, the gem, is beautiful, ecstatic soul, but with a Byrdsy guitar line. What a strange, compelling group they might have become.