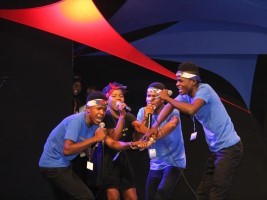 Friday, August 16 at Vilatte in Pétion-ville, in the presence of about 500 people including senior officials of the Ministry of National Education, members of Minister Cadet’s cabinet, teachers, principals, students, parents and friends and partners of the sector, took place the final of the 4th Edition of the Music Contest “An n kole tet for yon lòt Ayiti” among the 10 finalist groups https://www.haitilibre.com/en/news-28467-haiti-culture-final-straight-for-the-finalists-of-the-music-contest.html

The task was not easy for the members of the jury composed of BIC, Bélo, Tamara Suffren, and Fabrice Rouzier. BIC pointed out by coming to proclaim the results, the choice was not easy because, the young people are stuffed with talent. Bélo said he was strongly impressed by the performance of the young people throughout the contest which started in January 2019 https://www.haitilibre.com/en/news-26624-haiti-education-launch-of-the-4th-edition-of-the-school-music-competition.html

The 10 finalist groups were at the height of the event and were able to give the best of themselves, both by the quality of their text, the melody and their performance on stage, the first laureates have amazed the audience and the jury of the competition whose conclusion was unanimous on the choice of the first winner.

The 4 youngsters from the “Talents Confirmés” group of the Lycée Philippe Guerrier of Les Cayes (South) won with Brio this 4th edition of the Music Competition, organized by the Ministry of National Education.

The 2nd Prize was awarded to one of the two groups of the Lycée du Cent-Cinquantenaire (West) who also amazed the audience with their performance and the beauty of their costumes.

The Mission College of Hope (West), again, was on the honor roll with third place.

Laptops, books, CDs containing the ten finalist groups, scholarships and support funds are among the bonuses offered to the winners of this 4th Edition. In addition, it is important to highlight this year, medals were awarded and the trophy of the champion offered to the 1st Group winner to stimulate and encourage more young people to take part in this activity.

Let’s note that Bélo and BIC played two songs during this final respectively “Lakou trankil” and “Mèsi Manman” that made the audience vibrate.

A special mention and a medal were awarded to a member (visually impaired) of the Group of colleague Hugo Paul de Frères for his performance.