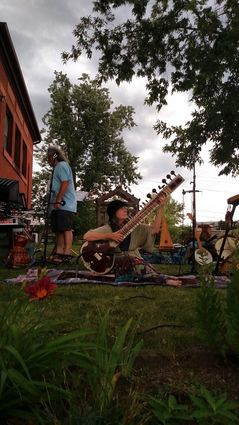 Ironwood – Although a brief rain shower cut one concert short, there was plenty of music in downtown Ironwood Friday for the city’s August First Friday celebration.

A section of East Aurora Street was closed off in the evening as people set up lawn chairs or took a seat on the curb to enjoy a performance by Four Shillings Short at the Ironwood Carnegie Library.

Comprised of Aodh Og O’Tuama and his wife, Christy Martin, Four Shillings Short advertises that its shows can feature over 30 instruments and include music from around the world.

Along with enjoying the music, those on Aurora Street had several food and refreshment options.

A brief rain shower cut the performance short, but the locals all came together to help O’Tuama and Martin get their instruments inside the library before they got too wet.

In addition to the Four Shillings Short performance at the library, this month’s First Friday included Joshua Davis and May Erlewine performing at the Historic Ironwood Theatre.