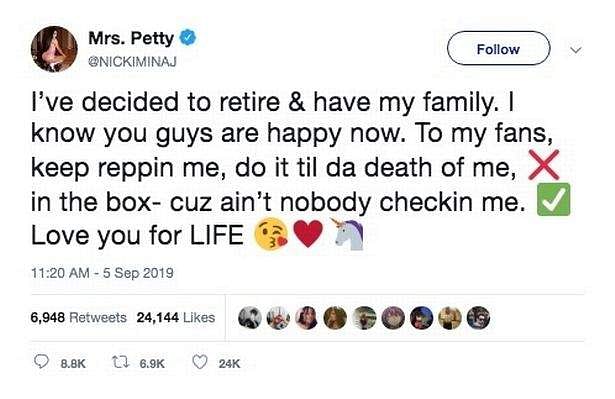 WASHINGTON: After making you groove on her hit numbers for years, singer and rapper Nicki Minaj has announced retirement from the music industry to “have a family.”

The rapper made the stunning announcement on Thursday by tweeting, “I’ve decided to retire & have my family. I know you guys are happy now.”

Meanwhile, showing her love for fans and asking them to keep “reppin” her, she said, “To my fans, keep reppin me, do it til da death of me, [X] in the box- cuz ain’t nobody checkin me. Love you for LIFE.”

Following Minaj’s tweet, fans went into frenzy and a state of despair.

“Girl I don’t know why she playing with us,” tweeted a user.

I’m still right here. Still madly in love with you guys & you know that. In hindsight, this should’ve been a Queen Radio discussion & it will be. I promise u guys will be happy. No guests, just us talking about everything. The tweet was abrupt & insensitive, I apologize babehttps://t.co/eS0oHipwtg

Meanwhile, another user posted a gif of a man crying.

“So the music industry is over,” wrote another user.

Minaj, during her Queen Radio show last month announced that she will be walking down the aisle with boyfriend Kenneth Petty “in 80 days.”

The rapper even changed her Twitter name to “Mrs. Petty” following the marriage news.

The two have been dating since December, last year, according to Minaj’s Instagram.

Petty also unveiled a new tattoo of his lady love’s birth name, Onika, in December, and featured in Minaj’s music video for her song ‘Megatron’.