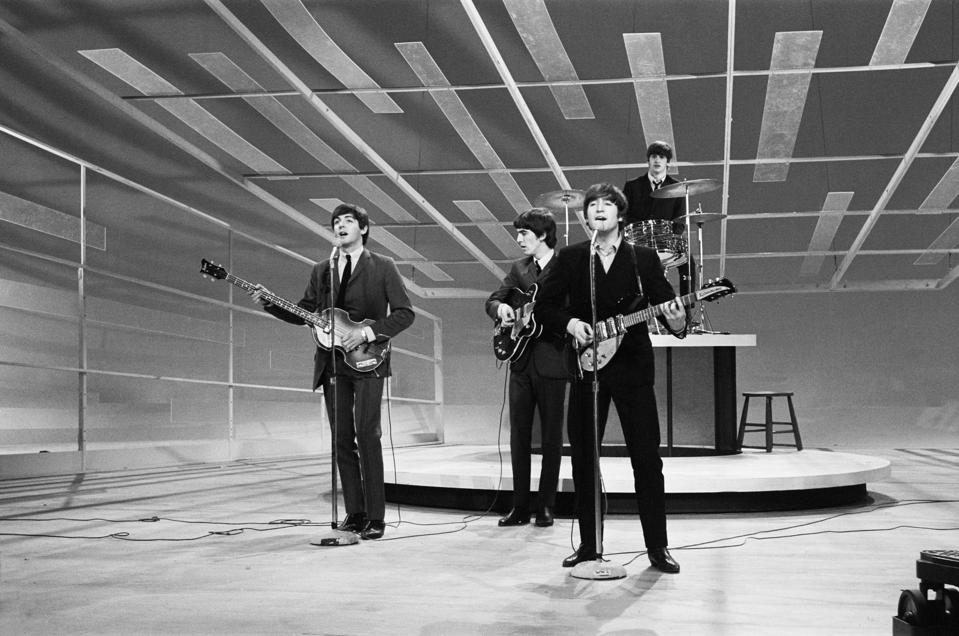 The Beatles rehearse before their appearance on “The Ed Sullivan Show” in February 1964.

Topline: Sony inked a deal Wednesday as the exclusive distributor of Beatles merchandise in North America, but in a sign of their enduring appeal, original memorabilia from the Fab Four’s British invasion can fetch millions on the secondary market.

$2 million: The band’s psychedelic Rolls-Royce. Purchased by John Lennon in 1966 and used by the band until 1969, the car hit Sotheby’s auction block in 1985, where it fetched the eye-popping price. $1.2 million: John Lennon’s handwritten lyrics for “A Day in the Life.” The Liverpudlian scratched a few lines of the final track from Sgt. Pepper’s Lonely Hearts Club Band on a sheet of paper that went up for auction in 2010.$300,000: George Harrison’s handwritten lyrics for “While My Guitar Gently Weeps.” Thought to be a working draft with Harrison’s handwritten corrections, the lyrics, auctioned in 2007, contain lines that didn’t make it into the version on the quintessential “White Album.”$180,000: George Harrison’s leather jacket from the band’s Hamburg days. The Beatles cut their performing teeth playing German nightclubs in 1960, making Harrison’s jacket an early memento in this 2012 auction.$155,000: First pressing of Please Please Me vinyl record, autographed by the band. This item is a live eBay auction, and the seller says it comes with a letter of authenticity from one of Britain’s foremost Beatles memorabilia experts.Valued at $90,000: a 1962 Beatles audition tape up for auction. Recorded for Decca Records, which rejected the Beatles in favor of another band called Brian Poole and the Tremeloes⁠—because it would have been more expensive to transport the Beatles all the way from Liverpool to London and a record exec reportedly said at the time that guitar bands were out of fashion.

Key background: The Beatles are considered the top-selling act in music history, with more than 800 million albums sold globally. Before they broke up in 1970, the band earned an Academy Award and seven Grammys (along with a Grammy lifetime achievement award), and their recordings have been certified platinum many times over, among other accolades. But a merch deal with Sony is a sign of the times: The advent of streaming has cut into traditional record sales, according to the Wall Street Journal, leaving musicians to tour and sell collectibles to generate revenue. This new agreement (with undisclosed terms) will produce apparel and other products through brand partnerships, with the goods set to be sold at retailers including Hot Topic, Target and Forever 21.

Tangent: A cottage industry of memorabilia auctions from Paul McCartney and John Lennon’s solo careers also thrives. Pairs of Lennon’s iconic round glasses have been auctioned over the years, while a Paul McCartney guitar played at the 2015 Grammy Awards is waiting for a buyer willing to shell out $65,000.