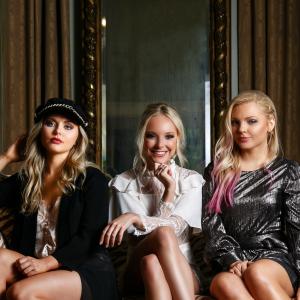 Southern Halo joined the roster of talent for HSN shows in Florida (November 5-9) and Texas (November 12-16), playing for a combined total of more than 24,000 students. In addition to the trio, the multi-genre line-up featured artists in Pop/R & B (Mimi), Pop (Haley Fishberger, Emily Perry), Country (Presley & Taylor), Alternative (Crimson Apple), and headliner Rapper Silento (best known for his music video “Watch Me,” seen over 1 BILLION times on YouTube).

Nurturing creativity is a passion for the women of Southern Halo. “Education and music are important to us,” reflects 21-year-old Natalia Morris, the group’s principal songwriter. “High School Nation brings artists like us in to perform for students and we’re able to talk with them and encourage them. The organization also donates a recording studio to each school they visit. It’s pretty amazing.”

These young women are committed to ensuring that all students have access to the knowledge that they – and others like them – have learned through challenging work … and the occasional misadventure. The Backstage Pass Series offered at GRAMMY Museum Mississippi targets kids grades three and up – and offers students the opportunity to explore a variety of music careers, hear artists’ stories first-hand, and meet industry professionals. This allows for a more realistic understanding of the level of talent, commitment, and perseverance it takes to succeed in the music business.

The siblings were excited to participate in the Series. “The focus is on younger kids, and I remember being so full of emotion and creativity at that age,” notes drummer Christina, now 19. “Music is a great vehicle that encourages people to share thoughts and feelings with others who might relate,” adds bassist Hannah, the youngest member at 18. “Our experience is that it definitely brings folks closer.”

In addition to performing, Southern Halo has been promoting their new single, “I Think Too Much,” from their current album, JUST LIKE IN THE MOVIES, and has visited radio stations in Alabama, Illinois, Kentucky, Missouri, Tennessee, Texas, Wisconsin, and West Virginia this fall. The siblings headlined last month’s inaugural Front Porch Music Series show at GRAMMY Museum Mississippi.

ABOUT SOUTHERN HALO
Natalia (principal songwriter, guitarist, lead vocalist), Christina (drums) and Hannah (bass) are SOUTHERN HALO. Since their hypnotically-upbeat Country radio debut, “Little White Dress,” caught the attention of U.S. radio and press (spending eight weeks at #1 on the International Hotdisc Chart) this sibling trio has broken down doors and shattered glass ceilings. Their sophomore single, “Rewind,” was a U.S. Top 40 MusicRow CountryBreakout™ Chart hit that also held the #1 spot on the Hotdisc Chart for two weeks. The group’s third single, “Living Like That,” quickly found success of its own. Those three singles, from the group’s previous CD, SOUTHERN HALO (2015), further bolstered the trio’s profile. Since landing in the National Finals of the 2014 Texaco Country Showdown as the youngest competitors ever, the band has opened for Maren Morris, Phil Vassar, Deana Carter, Love and Theft, Brantley Gilbert, Eric Paslay, Tyler Farr, Parmalee, Old Dominion, American Young, Blues immortal B.B. King and legendary chanteuse Dionne Warwick, among many others. The Cleveland, Mississippi natives have performed at a pre-show on the rooftop terrace of the Grammy Museum in Los Angeles and launched Townsquare Media’s Say It With Pepsi Concert Series. They entertained fans at CMA Music Fest 2018 and 2016, and have twice toured the U.K. When they are not on the road, the Morris sisters now call Nashville home.

ABOUT HIGH SCHOOL NATION
High School Nation has donated more than $3.5MM in support of public high school music & arts programs in the US since the 2012 inception of the High School Nation Tour. Providing the most unique way to mesh teens with brands, HSN is quickly becoming the go-to organization for reaching the most influential demographic in the country, in an inspiring and life-changing way. Sponsors for the current tour include Takis, Hollister, truth, Sparkling Ice, Guitar Center, Hearthstone, and Cow Tales. For more information contact Jimmy Cantillon (310) 734-6527