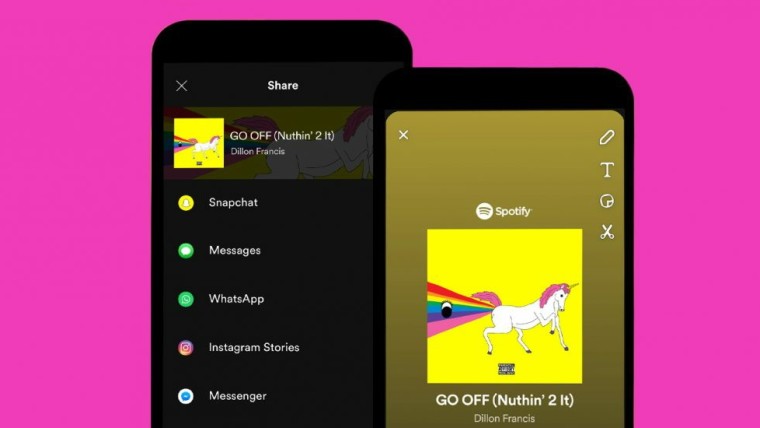 For ages now, Spotify users have been able to share music and other content from the platform to other applications such as Instagram, Facebook, Skype, Google Maps, and Waze. Today marked another milestone in the music streaming service’s efforts to integrate its services with other platforms. As announced today, soon all Spotify users will be able to share content from the streaming service to their friends on Snapchat as long as it’s installed on their phones.

Spotify revealed the move to integrate both two platforms in a press release posted earlier today. Sharable content to Snapchat includes tracks, playlists, albums, and podcasts which may be posted on a user’s Snapchat Story or sent directly to friends in personal messages.

Tap the “share” menu (three dots on the right of the screen) while you’re listening to any song, album, artist, or podcast.
Select “Snapchat” from the dropdown list.
Snapchat will open a new Snap with the full album art included.
Edit and send—whether to a few people or to your Story!
If a friend sends you a Snap with a song, playlist, artist profile, or podcast rec included, you can start streaming with a few quick steps:
Swipe up from the bottom of the screen.
Tap the context card with song, artist, playlist, or podcast info.
Spotify will open and play away!

Spotify users will be able to use this new feature once the update starts rolling out. The integrative new feature will be available to iOS and Android users alike in the near future.