Ireland is well-known for its rich musical heritage and its vast collection of ancient musical instruments spanning more than 3000 years from the Late Stone Age through to the Early Medieval Period (4200BC – 1000AD).

Read More: The history and origins of traditional Irish music

Many of the earliest Irish legends contain references to instruments and music, and the exceptionally large numbers of surviving Irish metal horns (40 percent of the world total, according to AncientMusicIreland.com) indicate the importance music played in ancient Ireland.

Colm Moriarty, who runs the excellent blog Irish Archaeology, highlighted five of the most important ancient musical artifacts. These instruments reflect the changes that evolved in Irish culture and civilization over thousands of years.

Discovered in 2003 during an archaeological excavation carried out by Bernice Molly at Greystones, Co. Wicklow, these six hand-carved cylindrical pipes fashioned out of yew wood are the world’s oldest surviving wooden musical instrument.

Ranging in size from 2.8″ to 11.4″ long, the pipes were found lying side by side in descending order in a waterlogged trough belonging to an Early Bronze Age burnt mound (c. 2120-2085 BC).

The pipes had been hollowed out internally but there was no evidence of finger holes. Instead, the ends of some of the pipes had been worked to a stepped taper, suggesting that the pipes were to form part of a composite wind instrument, such as a bag-fed organ or a pan-pipe like device.

Two main types of horns existed in Ireland during the Late Bronze Age. One blown from the end, usually found in the southwest of the country, and one from a side mouthpiece, which can be found evenly distributed throughout Ireland.

These instruments seem to have been extremely popular and over 122 horns have been discovered in Ireland to date. It is believed they may have played a major role in artistic and/or spiritual practices.

Two Late Bronze Age horns were discovered in Co. Antrim at bogs located in Drumbest and Drunkendult and are now housed at the National Museum of Ireland. Made from bronze but originally cast in clay molds, these horns are an example of sophisticated early metal-working.

Read More: WATCH: This family of Irish trad musicians will blow you away

These hollow-cast, pear-shaped pendants would contain a loose piece of bronze or stone inside that would rattle when the instruments were shook.

Known as crotals, a Gaelic word derived from the Latin crotalum, meaning rattle, the pendants have a loop at one end, suggesting that they were probably suspended. A total of forty of these instruments survive from the late Bronze Age.

The Dowris Crotals, now housed at the British Museum, were part of a huge Late Bronze Age hoard uncovered in Co. Offaly in the mid-19th century.

Crotals are distinctly Irish and have not been found outside the island.

Read More: The only traditional Irish music playlist to get you through Monday 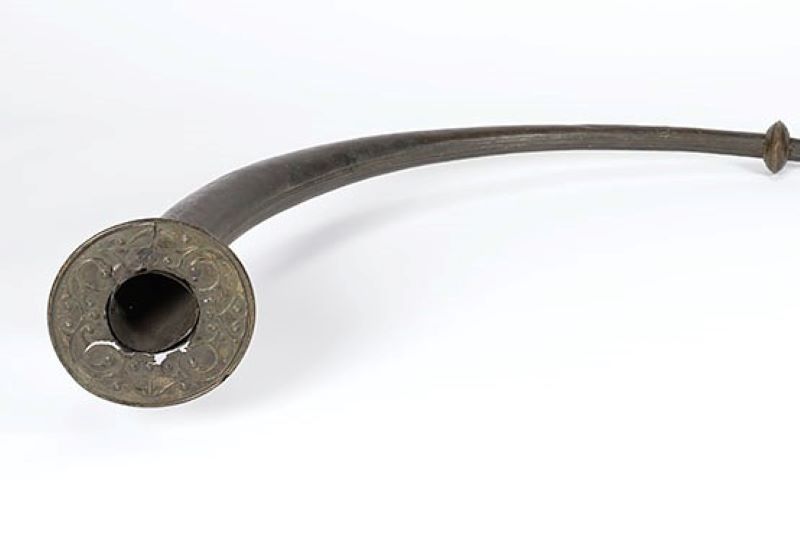 Loughnashade trumpet was discovered during drainage works at the site of a former lake (Loughnashade) in Co. Armagh along with three other horns, since lost. A collection of human skulls and bones was also discovered at the site suggesting some sort of ritual deposition, according to IrishArchaeology.ie.

Measuring six feet in length and made from curved and riveted sheets of bronze, the instrument is one of the finest surviving horns of the European Iron Age. The decorative flange at the end of the horn has an abstract floral design.

It is believed the trumpet may have been a war-horn or used during special ceremonies. 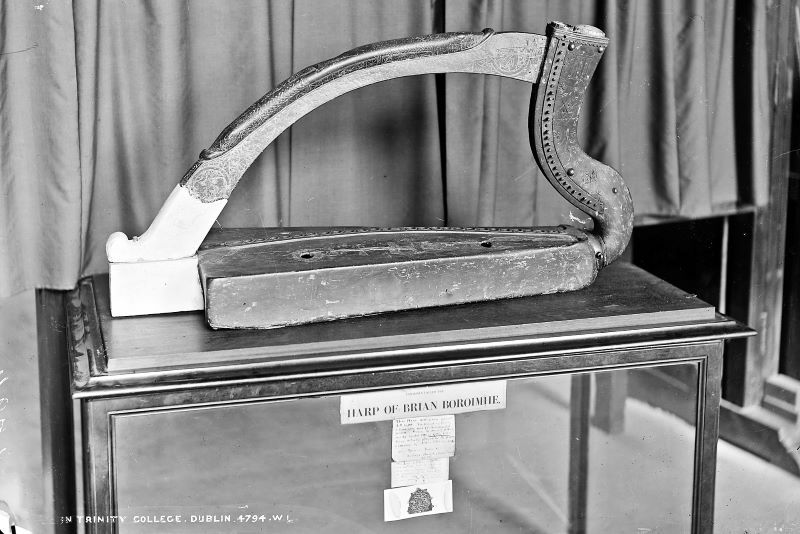 The harp is one of Ireland’s national symbols, used on Irish coinage and state insignia.

Although the 18th-century antiquarian Charles Vallancey believed this harp was once owned by Brian Boru, giving the instrument its name, it is now believed that this is highly unlikely. Probably dating back to the 15th century, the instrument is intricately carved and bears the O’Neill coat of arms.

*Originally published in May 2014.

This August, we’re celebrating Gaeilge (the Irish language) and Irish music with a series highlighting those around the world speaking and learning Irish, and playing Irish music.

Visit our dedicated music section here or our Irish language section here to read more. You can follow throughout the month by using the hashtags #ICMusic, #ICGaeilge or by following us on Facebook, Twitter, Instagram or LinkedIn.

What’s your favorite Irish instrument? Let us know in the comments