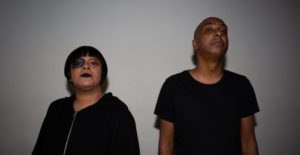 Toronto-based electronic duo LAL tackle very down-to-earth social issues through their music, but for their new album, Dark Beings, they took inspiration from something out of this world. The two members of LAL—Nicholas Murray and Rosina Kazi—got motivated by listening to NASA satellite sound recordings and tried to recreate those sounds on the album using synthesizers.

“The direction we’re trying to travel into is like some sort of celestial beings,” says Murray.

And the members of LAL are taking that interstellar inspiration and bringing it back down to earth with a powerful message. With safe spaces being torn down by organizations and institutions, Murray and Kazi have built their own: UNIT2, a radical arts and community space in Toronto. Creating that safe space ties in with what the band explore on their new album.

“Dark Beings is about what happens with that energy and how we transcend our physical bodies when we’re in those places of safety, euphoria,” says Kazi.

The lyrics on the new album deal with environmental issues, racism, and sexism in the queer and trans communities and remind the listener that despite what has been taken away from certain people, we have the power to stand strong, and by the power of our imagination we can transcend the physical world and our bodies.

“Our music is a reflection of what we’re already talking about as a community,” says Kazi.

The two have been performing together for around 20 years, spreading their stories and creating a small sanctuary in every town they play in.

“When we perform, we want that place to be a safe space. We want to create a safer space for the community,” says Kazi.

Murray wants to eventually take the band further around the world, mentioning Japan as one place where he’d like them to go.

“I want to travel and explore the natural world before we destroy it,” adds Kazi, “so wherever our music can take us, I’m down.”

Murray says that it’s important to give back to the community and that he feels like it’s one of his mandates; Kazi echoes the community-based sentiment.

“I refer to us as being part of an ecosystem,” she says.

There is no resentment or hate in the songs on Dark Beings (which got a spot on this year’s Polaris Music Prize long list), but Kazi says that the two had those feelings in the past.

“A lot of us get left behind,” she says. “I’ve realized the difference between a music industry or arts industry and then an arts ecosystem.”

That realization has helped them to move ahead. The term “industry,” to Kazi, has the implication of being wasteful, and of people being treated poorly and unjustly. We’re all part of an ecosystem, and Murray and Kazi know how connected we all are.

“We grow—it’s like a garden or a forest,” she says. “Every creature, every living species… Every one of our spirits relies on each other.”

Murray and Kazi are grateful they get to meet many amazing folks who are interested in the topics the band explores, and who are up for discussing them. The duo’s ecosystem is not limited to just artists; there are people from many disciplines and backgrounds.

“Their intention is to really support our community and themselves,” says Kazi, noting that it’s amazing that there are people “coming together to create a better world.”

Murray agrees, expressing his gratitude for the community that the two get to be involved in.