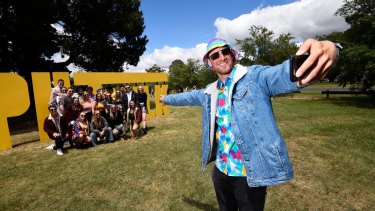 “I do not endorse anyone taking illicit drugs – but in the face of evidence that people are taking these drugs we simply cannot stick our heads in the sand,” Cr Capp said.

On November 12, the Melbourne City Council voted to endorse a submission backing draft legislation being submitted to State Parliament by Greens MP Tim Read to trial a free mobile pill-testing service at festivals and a fixed-site laboratory for drug analysis.

But on Sunday Victoria’s Police Minister, Lisa Neville, said the government would not change its position on pill testing.
“There is no evidence that pill testing does anything but give a false sense of security to young people that pills are safe to take,” she said.
“One of the things that Victoria Police do and continue to do is to give early alerts where there are drugs on our streets that are dangerous and that’s the kind of information we try to get to young people as early and as quickly as possible,” she said.

Police are investigating the circumstances around the 24-year-old man’s death at the Strawberry Fields event and a report is being prepared for the NSW coroner.

Organisers of the Strawberry Fields music festival said in a statement online they had “implemented every single harm minimisation strategy that is legally available to us”.

“However, we cannot control the choices of individual patrons. We are begging people to stop and think about the ramifications of their choices on their family and friends and to stay safe.”

Six people were charged with possessing a drug of dependence at Ballarat’s Spilt Milk festival on Sunday, while 21 others were given a caution for possession.

Ballarat police Inspector Dan Davison told the Ballarat Courier on Saturday night police were concerned by the attitude towards recreational drug use, with many people questioned for drug possession directed towards diversion programs.

The Ballarat region has a chequered history with drugs at music festivals, with seven hospitalisations due to drug use following the Rainbow Serpent music festival in Lexton earlier this year.

There were a further 10 arrests for drug trafficking and 54 drug notices issued at the four-day dance music event in January.

In 2017, 22-year-old Jacob Langford died of a drug overdose at the Rainbow Serpent music festival.

Adriana Buccianti, the mother of 34-year-old Daniel who died of a drug overdose at the same festival in 2012, came out in support of pill testing earlier this year.

Four people were arrested for supplying drugs at a separate event, Festival X, in Sydney’s west on Saturday.

Another 13 people were fined for possessing prohibited drugs and 137 drug detections were recorded at the festival.

Festival X is on at the Melbourne Showgrounds on Sunday.

With Pallavi Singhal and the Ballarat Courier

Ashleigh McMillan is a breaking news reporter at The Age. Got a story? Email me at a.mcmil[email protected]

Rachel covers general and breaking news for The Age.